The science behind FIFA’s footballs

Posted on 16 June 2014 by mmmbitesizescience

Lovers and haters of the World Cup alike can’t fail to be amazed by the skills of some professional footballers. Like David Beckham or Cristiano Ronaldo. But while some footballers have been blessed by biology, it’s not just the combined genetic talent of a player or a team that leads to a stunning win or a sorry loss. According to scientists at the University of Tsukuba in Japan, the aerodynamic performance of a football can introduce a skill set all of its own.

The football has evolved substantially from its vaguely nauseating origins (an inflated sheep’s bladder) to the shiny polished orb in use today. A typical football is made from 32 five- and six-sided panels stitched together to form a pleasingly spherical shape. In recent years, this basic design has developed towards minimising the number of panels and changing the pattern in which they’re stitched together to boost aerodynamic performance and consistency. Adidas, who ride at the forefront of innovative football design, have created the Cafusa (32 panels; currently used by many football leagues), the Teamgeist 2 (14 panels; the official ball of the 2008 EURO cup) and the Jabulani (8 panels; the official ball of the 2010 FIFA World Cup). Now, for the FIFA World Cup 2014, they’ve made it to the 6 panel ball: the Brazuca.

The team of Japanese scientists wanted to find out how these different balls – the Cafusa, Teamgeist 2, Jabulani, Brazuca and the traditional Molten Vantaggio 32-panel ball – behaved in flight, and how this affected shot accuracy on goal. To do this, they employed a wind tunnel, a kick robot and a whole bagful of beautiful balls. To take into account the difference in panel stitching design, they looked at the ball’s performance when it was kicked off from two orientations: normal (head on) or tilted 180 degrees (see below). 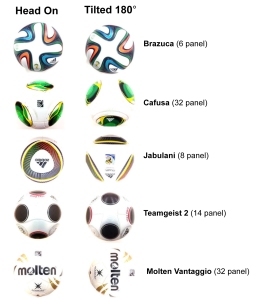 They found that the different balls experienced substantially different aerodynamic forces as they were “kicked” into the wind tunnel. The Brazuca was the most stable ball in flight, followed by the conventional ball, Cafusa, Teamgeist 2 and Jabulani.

When the balls were travelling at higher speeds (the equivalent of a good hearty kick, or a “power shot”), the Cafusa generated the biggest increase in lift and side force – which could allow the ball to travel a greater distance. The Jabulani put in the worst performance in this category, and behaved “irregularly” when it was in flight.

The scientists then launched balls from both orientations at 30m/s towards a goal 25m away, and plotted the hits on target (see graphs below; blue is head on, red is tilted 180°). The Brazuca and the conventional ball gave the best performances, hitting the target most consistently regardless of the orientation of the ball (the blue and red spots cluster together). For the Cafusa, the Jabulani and the Teamgeist 2, the flight paths and in-flight behaviour varied hugely depending on which orientation the ball was in when it set off towards the goal (the blue and red spots are far apart). Even when the number of panels were the same (Cafusa vs. Conventional ball; both 32 panels), differences in panel orientation and stitching design meant the conventional ball hit the target more consistently than the Cafusa.

These results – particularly the importance of panel orientation on performance – will undoubtedly be used to inform the design of the next generation of footballs with an eye to improving shooting accuracy and enhancing player performance. Ultimately, though, the conventional 32 panel ball performed just as well – if not better – than most of the innovative new footballs tested, suggesting that at some point it’s not that easy to improve upon design perfection.