As T cells bumble around our bodies, they are constantly on stand-by to recognise pathogenic target proteins. These pieces of protein are presented to T cells for inspection by other immune cells, known as antigen-presenting cells (APCs).

The T cells scoop up the pieces of protein being held up for inspection by the APC, along with a tiny bit of the APC membrance in a process known as trogocytosis. This leads to T cell activation and killing of infected target cells.

Now, scientists have discovered that trogocytosis is also used by the gastrointestinal parasite, Entamoeba histolytica, to chew away at individual host cells in the gut until they die. Once that happens, the parasite moves on to the next tasty cell snack. It also appears that practise makes perfect: the parasite refines its killing skills and becomes quicker at ingesting target cells as it spreads from cell-to-cell. 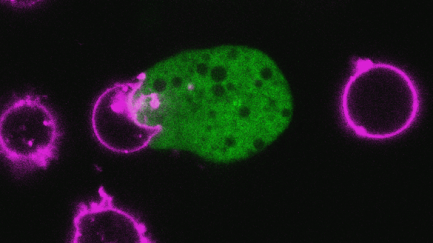 Now we know that trogocytosis is involved in this nasty, potentially fatal gastrointestinal disease, we can begin to design therapies that block this pathway and stop the parasite in its tracks.

Image credit: Katy Ralston. The parasite is shown in green, while the target human cells are shown in fuschia.

This entry was posted in Disease, Immunology, Microorganisms, Parasites, Science. Bookmark the permalink.