As we have learned more about the world of microbes, it’s become clear that it’s possible to use bacteria and viruses as treatments against disease. But although microbes often work incredibly well at protecting against infections or attacking tumours, we still don’t really know exactly how they work. 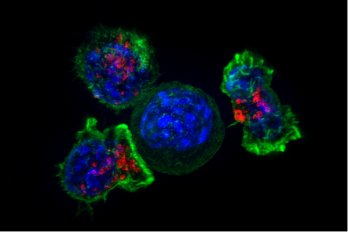 We know that our immune systems have developed ways to keep up with the devious tricks and schemes of microbes. When our cells become infected, the immune system activates a huge cascade of pathways, one of which leads to the activation of T cells against infected targets.

For T cells, forming a tight bond with these infected target cells is thought to be incredibly important in achieving a high-grade T cell killing performance.

Now, a team of scientists from the Chinese CDC has found that the tightness of the bond between a T cell and a target cell infected with vaccinia virus (administered as a therapeutic vaccine) relies heavily on the expression of the signalling molecule, MyD88. Surprisingly, it doesn’t rely much on the affinity of the T cell receptor, or the inflammatory conditions generated by the infection.