Zinc takes the sting out of jellyfish venom

Posted on 29 December 2012 by mmmbitesizescience

For me, there are three extremely good reasons never to go to Australia – huge furry-bodied poisonous spiders, venomous lightning fast snakes and sharks with great mouthfuls of serrated teeth. After reading a recent article, I am now happy to add a fourth to the list: the Australian box jellyfish. Your average run-of-the-mill jellyfish sting is definitely an unwelcome arrival, delivering a sharp, searing pain and leaving your skin all red and puckered, but it doesn’t usually require medical intervention. A sting from the Australian box jellyfish, Chironex fleckeri, a beastie with up to sixty 2-metre long tentacles, each capable of injecting hundreds of thousands of tiny poisonous capsules, can result in the rather more serious outcome of total shutdown of heart and lung function, and death. While there is a general anti-venom available, it’s not very effective, and there is definitely room for therapeutic improvement. 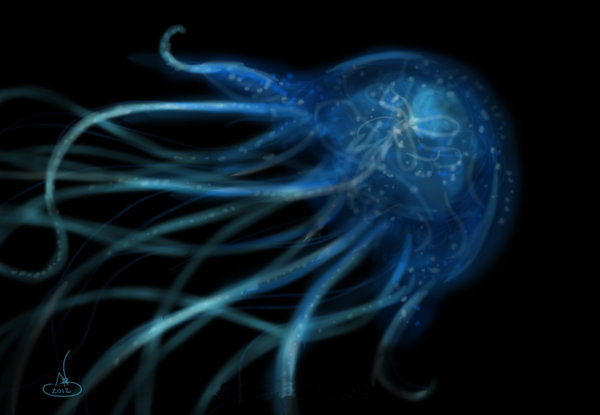 A team of researcher’s from the University of Hawaii wanted to get to grips with the constituents of box jellyfish venom, how they worked to generate such a serious reaction in the human body and more importantly, how to counteract these effects. The venom of the box jellyfish is a complex mixture of proteins, fats and other active molecules. The most severe biological consequences are caused by the porin proteins, which are designed to create fluid-filled passages through cells that allow molecules to pass in and out. Just five minutes after box jellyfish venom is delivered, these porins begin to punch holes in red blood cells travelling round the circulatory system, allowing first potassium and then haemoglobin to leak out. After twenty minutes, this steady leakage causes red blood cells to pop, rendering them entirely useless as oxygen couriers. This is all accompanied by a steady decrease in heart function, including electrical abnormalities and arrhythmic contractions.

Zinc, one of the metallic elements, is already known to interfere with the ability of porins to burrow tunnels through cells. Mice were exposed to box jellyfish venom and then given an injection of zinc gluconate, an FDA-approved natural dietary supplement, immediately afterwards. This slowed and reduced the level of molecular leakage from red blood cells, maintained the heartbeat in a more normal state and ~60% of mice survived (none survived without the treatment). Zinc is therefore at least partially able to counteract the actions of box jellyfish venom, and could represent a useful new frontline treatment for box jellyfish sting victims.

You can read the original article in full here.