Seafood offers up a mouthful of man-made garbage

Posted on 14 August 2016 by mmmbitesizescience 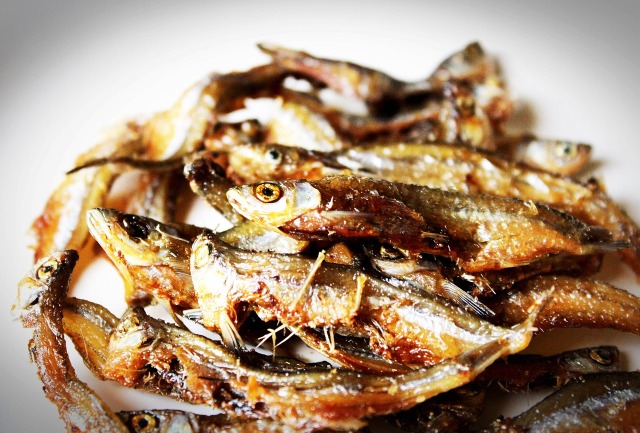 Public opinion is divided on the pleasure of consuming sea creatures that stare boldly back at you while you eat them. Like Marmite®, you either love it or you hate it.

Now, researchers at the University of California, Davis have added an extra level of complexity to this debate by showing that the seafood we eat regularly contains man-made rubbish that has made it out to sea.

The team caught and sampled a wide range of seafood from different ocean habitats – including fish (like anchovies, red snapper and tuna) and oysters – from Half Moon Bay and Princeton in California (USA) and Makassar on the island of Sulawesi (Indonesia).

At both these sample sites, around 1 out of every 3 fish or oysters contained litter. And over half of all the sampled fish species had man-made litter in their digestive tract.

(On the bright side, this suggests that gutting a fish before consumption should remove the litter-laden portion. But for fish and seafood that are eaten whole, it’s a very different story).

In Indonesia, most of this debris was plastic, including plastic fragments, foam and film. In the USA, the seafood was mostly full of textile fibres. 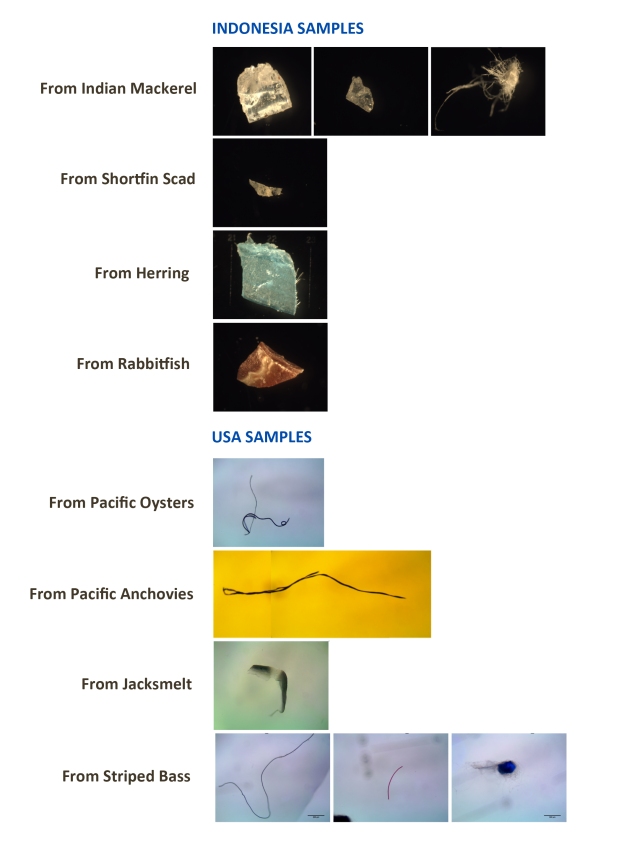 Samples of the types of man-made litter sampled in seafood from sites in Indonesia and the USA. Modified from Rochman et al 2016.

This difference in the type of rubbish found in the seafood in the USA vs. Indonesia probably reflects the different styles of waste management in the two countries.

About 30% of solid waste generated in Makassar gets discarded straight into the ocean, so large plastic objects can easily degrade into small fragments and particles over time.

In California, over 200 waste processing plants dump treated effluent into the ocean, but these systems are not designed to remove synthetic fibres from washing machine runs – or a whole host of other complex drugs, like antibiotics and opiates. In fact, overhauling the waste management systems in countries around the world to deal with these issues, and ultimately provide safer drinking water, is a critical concern. 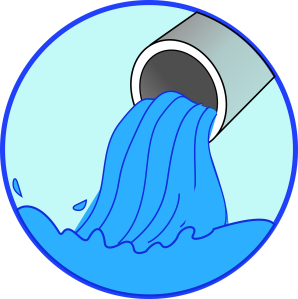 This research highlights a real worry over the impact that eating these hidden seafood treasures could have on human health. This could range from physical trauma as detritus is inadvertently consumed, to the accumulation of toxic levels of pollutants up the food chain, to a lack of food security if seafood populations decline after eating our litter or swimming in our chemical-laden water.

Indeed, several organisations, including the United States Environmental Protection Agency (USEPA) and the United National Environment Programme (UNEP), have prioritised research into the effect that man-made debris has on the health of humans and their environment.

When you see the horrific pictures of the Great Pacific Garbage Patch, where artificial islands of man-made litter stretch out for hundreds of miles, it’s hardly surprising that hundreds of years of waste mismanagement are coming back to haunt us.

But it’s uncomfortable for it to stare up at us so boldly from our plates.

For more information, check out this great TED talk by Charles Moore.