The Science of Guns and Violence in America

Posted on 27 April 2013 by mmmbitesizescience 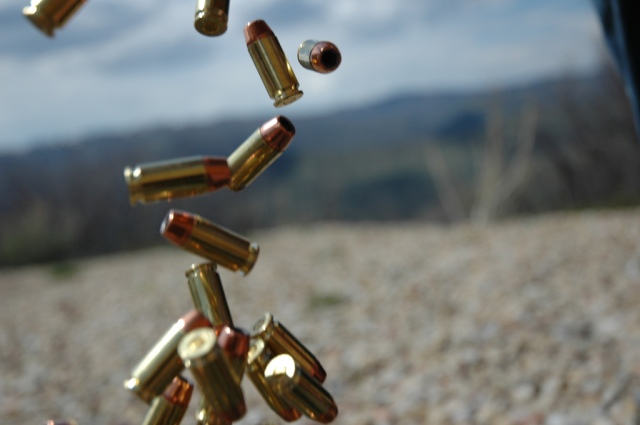 I read a Nature News article recently about gun control in the USA that horrified me so much that I now have to write a bit about this horrifying topic myself.

Out of all the developed countries, the USA has the most firearms per person, and the highest number of gun murders. But perhaps the most gut-churning revelation, seen in the graph below, is that the number of deaths caused by firearms is now the same as the number of deaths caused by car accidents. While supporters of guns might gnash their teeth at this, giving out responses like, “cars cause deaths but we still drive them”, well, yes, that’s all very well, but cars aren’t machines that were ultimately designed for the purpose of killing. 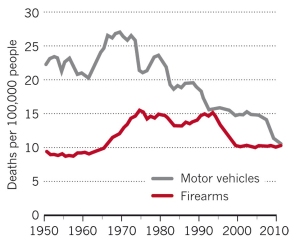 Here’s another startling fact: that research into improving gun handling, reducing gun accidents and squashing levels of gun crime is currently being performed by just a handful of scientists, and almost none of it is coming from a public health angle. To make matters worse, since 1996, scientific research into gun violence has been prohibited by law from receiving funding from the US Centers for Disease Control and Prevention if it advocates or promotes gun control. In 2012, this funding blockade was extended to include the much bigger US Department of Health and Human Services. The lobbying arm of the National Rifle Association, or the NRA, was instrumental in putting this legislation in place, and appears to have had a substantial influence on the policies of the American government.

That such organisations can still set political agendas is despicable. Policy-making has to be driven by evidence. Plugging up research into gun control dries up the supply of evidence, and implies that there is no interest in making the USA, and the American people, safer.

If you’re interested to learn more, you might want to look up Dr. Garen J. Wintemute, who has been researching the public health issues surrounding the presence of firearms in America. You can read a short and handy list of his key findings here, or read his brilliantly written review, ‘Tragedy’s Legacy‘. You can also sign this petition from Mayors Against Illegal Guns, which asks members of congress to take action against gun violence.

3 Responses to The Science of Guns and Violence in America