Posted on 4 April 2013 by mmmbitesizescience 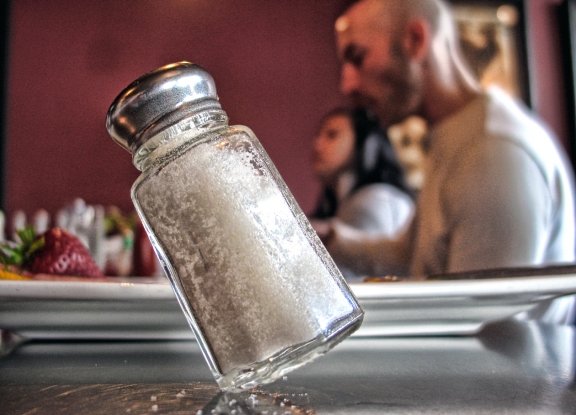 When it comes to knowing whether eating too much salt is a bad thing, there is a surprising lack of “verified-by-science” information available*. A certain level of salt, or sodium chloride, is a biological necessity that keeps muscles pumping and nerves firing off electrical signals. Yet lots of studies have suggested that high levels of dietary salt could contribute to problems with blood pressure and heart disease, which is why the CDC (and probably your mum) tells you to reduce your salt consumption. On the flip side, a study undertaken in 2011 by the Cochrane Collaboration (an international not-for-profit that performs unbiased reviews of existing experimental data to answer important public health questions) concluded that it is still unknown if low salt diets have positive or negative impacts on health.

Research has now been published that places an intriguing new entry onto the “salt is bad” list, linking high levels of salt to the development of autoimmunity – that is, your own immune system reacting against you. Rates of autoimmune disease have rocketed in the last 50 years, and while some of this is due to genetics, the sheer scale of the problem strongly suggests that modern lifestyle factors, such as diet, play a huge role.

Many autoimmune syndromes, like psoriasis, multiple sclerosis and arthritis, are driven by issues with a population of immune cells known as TH17‘s. Researcher’s have now observed that feeding mice a high salt diet, within relevant consumer levels, leads to an overproduction of these TH17 cells that are horribly dysfunctional, and induce earlier onset, more severe autoimmune symptoms in animal models of multiple sclerosis. While this research doesn’t go far enough to directly link high salt intake with autoimmunity, it does give serious credence to that notion.

4 Responses to Eating too much salt sends immune system haywire