Posted on 23 August 2012 by mmmbitesizescience 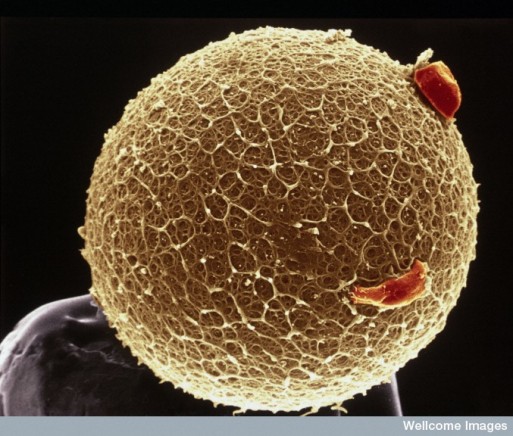 The male ejaculate, semen, is an eclectic mix of proteins, chemicals and hormones, all in a nicely fluid solution ideally suited to transporting spermatozoa during the process of reproduction. While many seminal fluid components and their corresponding biological functions have been well described, a team at the University of Saskatchewan in Canada has recently characterised a new molecule in semen that induces ovulation and persuades the ovary to ramp up production of pregnancy hormones in llamas.

While most mammalian species (such as cattle, mice and humans) work on the ‘spontaneous ovulation’ model of reproduction, where at a specific point in the menstrual cycle, hormonal and developmental conditions harmonise to allow follicle release, some mammals (such as the llamas used in this study, as well as camels, cats, rabbits and koalas) work on the ‘induced ovulation’ principle, where both the physical stimulation of intercourse and seminal fluid factors are necessary to encourage the ovary to release a ready-to-be-fertilised ovum.

This newly-established seminal fluid factor has been identified as nerve growth factor (NGF), and is present in semen from both induced ovulator and spontaneous ovulator species. NGF has previously been known for its direct role in the survival and growth of neurons in the central nervous system. This is the first documented evidence that NGF can have a direct biological effect on influencing ovarian function in the female reproductive tract. The findings of this study may have relevance for human fertility issues.