Posted on 23 May 2013 by mmmbitesizescience 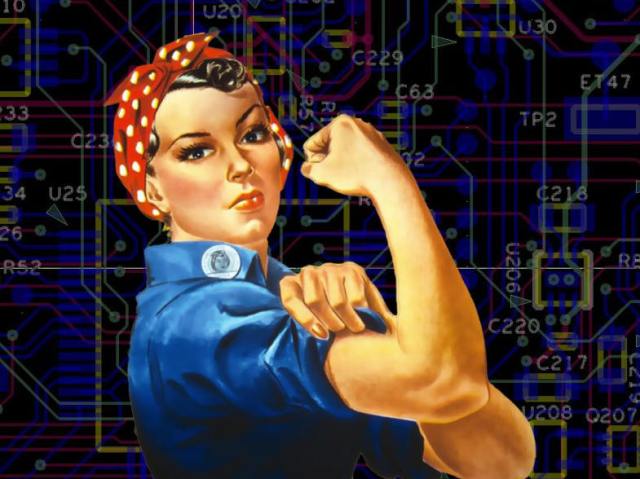 I recently volunteered to help organise an event run by the Canadian Science Policy Centre that looked at the status of women in science and technology. To be frank, I was mightily fearful about participating in such an event. I had the idea that it would quickly degenerate into a depressing evening of man-bashing.

Yet, as it turned out, it was actually a wonderfully empowering, evidence-based look at women working in STEM fields (or maybe I just thought so because I travelled to the meeting listening to the Spice Girls – the ultimate in female power).

Wendy Cukier and Dr. Maydianne Andrade first described that while overt gender discrimination no longer exists (for a recent convert to the ridiculously sexist show Mad Men, this is good news), subtly muted gender discrimination does. We have to acknowledge this reality, even if it doesn’t affect us personally.

Gender bias almost appears to be written into our basic subconscious – and the fabric of our society. It flows in many different directions: it doesn’t just come from men directed at women. Some fields are overtly biased against men – 2012 was the first year a male midwife graduated from a Canadian university. And women can be biased against other women. So improving everyone’s awareness about gender balance is important. As Dr. Robin Duncan said, being self-perceptive about your own biases can help you to consciously counter them. Dr. Maydianne Andrade suggested taking Harvard University’s online test Project Implicit as a first step in that direction.

A remarkably soothing message that came through was that You. Are. Not. Alone. Every person in every workplace in the world encounters the gender issue, although it’s more evident in certain fields – such as computing, engineering, maths and the physical sciences. While women have made inroads into the life sciences (left graph, in purple, below), it is pretty depressing to see how few women go into and stay in other scientific fields (right graph, in purple, below).

Being apathetic about balancing out the ratio of men to women in the workplace is remarkably easy. I used to be solidly indifferent myself. Wendy Cukier underscored that the decision to instigate change comes from essentially political powers, who are often resistant to such turbulence until enough pressure, advocacy and active engagement occurs.

One particular area in academia that was highlighted as prime for change was the way that in-house applications for pots of research funding get reviewed. Inherent bias in this system was first outlined in 1997 in a paper that analysed outcomes of postdoctoral grant applications to the Swedish Medical Research council. In these reviews, female applicants were consistently ranked lower in all categories, even though their research had the same level of scientific impact, and these review panels were made up of both men and women.

This is startling. Yet the solution is stunningly simple: to blind grant reviewers to the names (and consequently, genders) of the applicants. Research shows that this approach works. Yet few institutions seem to do it. This is unacceptable. Academic and private institutions have a stern responsibility to do all they can to minimise the potential impact of prejudice, and to seek out and put forward diverse candidates to fill new roles. Such problems and overt barriers are real. There is substantial evidence for their existence. And they need to be addressed.

Under the steam of this event, I came to realise that every minority – be it defined by gender or otherwise – still needs help to reach parity in the workplace. Without extending this help, new points-of-view and fresh, enriching ways of thinking are lost. This comes along with an inherent cost to our country and our society, which loses the capacity to achieve maximum innovation, creativity and output, all major factors that drive the economy.

For such help to be of any use, though, requires that women put themselves forward to advance in their career and fill new positions. The Hon. Lorna Marsden described a 2008 scheme run by the government of Canada to create and fill a new research chair position. Designed to attract international scientific experts, hundreds of people applied, 19 were selected, and all were men.

So, why is this? As Sheryl Sandberg, COO of Facebook, recently alluded to in her TED talk, such situations can stem from women being shy at owning their strengths, their successes and their ambitions. It is not bragging or self-aggrandising to recognise that you have done a good job.

Another piece of the reason pie is the inner working of a treacherous brain. Dr. Shiva Amiri mentioned the insidiously self-obstructive imposter syndrome, feeling like you don’t know anything and are going to be found out as a fraud. As Dr. Dawn Bowdish recommended, even if you don’t feel it, fake it – a great piece of advice. Wendy Cukier also made a good case for a proactive approach: seeking people out, asking them questions, taking the initiative and actually asking for things. Gender issues are only partly down to a biased system; the rest is not asking for what you want.

Seeing this team of six wonderful women (Hon. Lorna Marsden CM, Wendy Cukier, Dr. Maydianne Andrade, Dr. Dawn Bowdish, Dr. Shiva Amiri and Dr. Robin Duncan) getting to the bottom of a shared issue was a great experience. Knowing how the gender issue looks these days, compared with its past guises, is simultaneously a wonderful win and a sorry ongoing saga. There’s definitely much more to do – and I’m in for doing it.